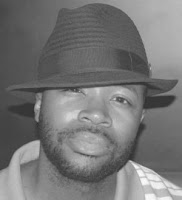 Join us as we chat with King Dhakir, author the critically acclaimed I Hate My Job. This fierce brother has the drive of 20 writers. His open and honest commentary on his work and the literary world in general is refreshing and inspiring. But don't take our word for it. Check out this interview. This lover of Curvy Books is impressed and will be picking up this books ASAP.

1. Tell us about yourself? I am the one and only King Dhakir. King is what I am, which is royalty due to my ancestral blood, and Dhakir means “Remembering God” in Arabic, which I strive to do amongst the weak and wicked. I’m originally from Chicago. Now I’m a rolling stone bouncing from various cities on the East Coast. I’m basically a Renaissance nomad.

2. How long have you been writing? I've been sharpening my pen for 17 years. Drawing cartoons sketches never worked out because I couldn't raw a lick. So I started writing episodes instead. As I got older, I expanded to lyric writing when I was interested in rapping. MCing has helped me tremendously with story writing because I can incorporate poetics and rhythm to my writings.

3. What drove you to pick up that pen for the first time? Winning $25 in an academic contest for writing an essay on a famous Black individual sparked my interest in writing. I won the award for writing an essay on Malcolm X. When one of my classmates had told me I won the award, I didn't believe her until they announced the winners over the loud speaker for the whole elementary school to hear.

I beat out everyone in the 4th grade level at my school, which means I pretty much out wrote roughly 80 students to win the award. So I answered my calling instead of refusing to pick up the phone to speak with opportunity.

5. Tell us about your book I Hate My Job?
I Hate My Job is not about hating your job, per sé.

The title is a metaphor for doing what you want to do instead of doing what you need to do. You need to work at a desk job or a fast food joint to pay bills, but you probably see yourself traveling across the world. My book is the alpha and omega of living out your vision because I’m sure everybody at one point had felt trapped in a situation, and either fought out of a bad spot or fell victim to their environment. I Hate My Job shows you how to GET OUT troublesome situations in order to become victorious.

I Hate My Job is filled with comedy, drama, suspense, and erotica, and also socio-political issues such as gentrification, which is going on in many inner city communities today.

6. Tell us about the plus size character in your novel. Who is she and what is her role in book? Does her size play an essential role in the book? Felicia is the main plus size heroine of the novel, and Justice’s (the main character) close friend as well as off and on lover.

She’s in the process of losing her home due to gentrification in Brooklyn. Gentrification in short is basically when land and property tax increases push long time residents out the area to make way for a new crop of people. Felicia is a fighter unwilling to back down from developers who are interested in turning her brownstone into a condo. The representation of a strong woman is shown in her character, and might be considered a feminist to some people reading the book because she wants to do for self without help from a man.

I have two other plus size women in the story, but they play minor roles.

7. Do you plan to write more books featuring plus size characters? No doubt. Every book I write will have plus-size characters. I don’t want to exploit people who are plus size, and that’s why I subconsciously didn't point out that Felicia was full-figured. I would rather EXPLORE the life of a plus-size individual instead of “type-writer pimping” a particular size.
And to add on to that thought, I don’t discriminate. I’m too diverse to pigeon-hole myself as an “author who writes only about full-figured people.” Even when I have full-figured characters, I’ll still maintain a balance of images to cease any biasness.

I also wanna point out just because a person is plus-size doesn't mean he/she is living an unhealthy lifestyle. Sometimes genetics plays a part in how people are built. I plan on dropping jewels here and there about health to show folks you can keep your shape while eating right and exercising. Breast cancer, especially among Black women, is due to the fact that the body is lacking Vitamin D. I’ll touch on that in future books as well.

8. Is there another novel in the works? I started writing my next joint entitled, Cracked Mirrors Are Good Luck. Each word in the title has its own story; five short stories in one book. The piece is basically a Science Fiction joint with mad flavor. It’s gonna be dope. I just wanted to do something different.

There’s at least 2 plus size characters, mainly women, in each short story. I’m gonna push the image of full-figured women to the forefront because it seems like I’m the only writer advocating for the size 10 and up crew.

10. Do you have any public appearances in the near future? Bush Baby Café in Bed-Stuy, Brooklyn will be hosting a book-signing for me as well as an open mic Saturday, October 24th. You can check out details of that event and other shows I’m throwing in the future by copying and pasting http://www.kingdhakir.com/apps/calendar/ to your browser.
I have a few tricks up my sleeve, for sure.

11. How can readers get in contact with you? Do you have a website? Anybody can reach me @ http://www.kingdhakir.com/

Please leave comments and other concerns of yours on the site. I have links to my other pages on social sites like Facebook, Myspace, etc.

12. What is the one thing you would like all of your readers to know about you? The world will get their money’s worth with no question. If they support me by purchasing I Hate My Job from my website, I’ll support them with a great read filled with entertainment as well as education.

I don’t play games with mastering my art as a writer. I appreciate all my supporters. So it’s only right for me to serve them timeless material with every release.

13. If you could tell one thing to every aspiring writer what would it be? I can say one thing, but actually I have three.

Don’t write a popular form of book just because everybody and their mamas are doing it. It makes you look weak and a follower, which equals disaster. The FIRST you is better than being the next someone else.

Also, aspiring authors should stop thinking that a lot of money is involved in the book game. You will make dough if you GRIND hard and make the right connects, but overall, a lot of authors still have their day jobs and are broke. It’s no different from the rap game. STUDY the greats who came before you, and learn how to command attention with words by reading books on the English language.

Last but not least, have LOVE for what you’re doing. What’s in your heart and mind will show itself between the lines. PEACE!!!


About the Author: King Dhakir was born and raised in Chicago and now resides in New York City. He keeps his sanity by reading, writing, traveling and working out in the gym. After graduating with a Bachelors of Arts degree in Journalism, he sharpens his writing through lyrics and blogging during his spare time. King is also happily single and currently enjoys the life of a bachelor, but doesn’t rule out the possibility of settling down with a Queen to accompany the throne. King has plans of writing another novel tentatively titled, Cracked Mirrors Are Good Luck, and is shooting for a future release.


*****Contest Alert*****
Comment on any of the October and November Interviews (Except the Interview by Monica Jones) and be entered into a contest to win your choice of one of the many books we have on hand.
Posted by Desiree at 5:29 AM

from a nice emcee to a nice novelist. nice work king dhakir.