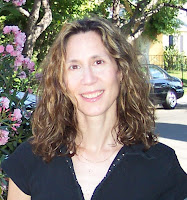 Join us as we chat with C. Leigh Purtill, author of the critically acclaimed All About Vee. Take a seat and read on as we chat with Purtill about Vee, the entire Fat Girls In LA trilogy and her literary journey as a whole.

*****Contest Alert*****
Leave a comment on C. Leigh Purtill's interview by June 30, 2010 and be entered to win a copy of one of the books we have available. See side panel for contest details

1) Tell us about yourself? I've been in LA for about 10 years but I still consider myself a New Yorker! I grew up on the east coast and moved around a lot and that has really informed my writing. Most of my characters are movers or otherwise fish-out-of-water like I was. I like that I've had a number of careers in my life which has also had an influence on my books. I've worked in engineering and marketing, film and television, and some other odd jobs that have given me insight into terrific characters and their worlds. Currently I write and teach ballet, which is my other great passion.

2) How long have you been writing? What drove you to pick up that pen for the first time? How long have you been writing books with plus size characters? I began writing screenplays in film school but after 5 years and 12 scripts, I couldn't come up with the high concept story I needed to break in to that end of the business. I had an idea for a story about 3 young women who moved to LA and I realized that it had to be a novel, not a script. The characters of the Vees - Veronica, Val, and Virginia- were based on seeing a woman standing on the corner in Beverly Hills who didn't look like the typical woman who would be standing there: she wasn't super skinny with designer clothes and spiky heeled Jimmy Choos. I wondered who she might be, what she might be doing in this area which was known for talent agencies - and Veronica and her friends developed from there. The book that resulted was the first I ever wrote!

3) Positive images of plus size young adults are hard to come by especially in the literary world but you have one in All About Vee. Please tell us a little about your book All About Vee? Why did you decide to write this book? Why did you choose to make Vee plus-size? VEE is the story of Veronica May, an 18 year old theater actress from Arizona who moves to LA to become a star in the movies after she learns her dead mother had attempted to do the same thing. She leaves behind 2 of her very best friends, who are also plus-size, as well as her father and his impending marriage. In LA, she finds that her weight is a major deterrent to getting work and making friends - but not in the ways that she would have expected. As a young woman, I too struggled with my weight - I have always had issues with it and when I moved to LA, I felt a little like Veronica: no matter how good I thought I looked, I was always too large and that was really amazing to me! Especially coming from a city like New York which is incredibly diverse! So in my mind, every woman in LA feels like a "fat girl." And from the responses I've gotten, there are lots of people who agree with me. :)

4) The Rise of Ginny Cooper is second book in the Fat Girls In LA trilogy can give us a bit of a preview of the second book. This book picks up 3 months after Vee ends and is told from Ginny's point of view. Ginny and Val move out to LA to be with Veronica and pursue their own dreams. Ginny has always wanted to be a writer and has a screenplay based on the Vees' life in Arizona. She would also love to have a boyfriend, which is something she never had back in her hometown. Ginny's experiences in LA - being asked to change your script for someone else, meeting men who want something from you, being someone's assistant - are all things a LOT of people trying to break into this industry do. Only for Ginny, they are slightly different - and more personal -because a lot of them have to with her size. But in the end, it's positive because I believe all 3 girls are positive role models for all shapes and sizes.

5) In January of 2010 The Rise of Ginny Cooper was made available on The Story Siren Website. Any plans to do this again for those that missed it in January. Are you any closer to finding a publishing home for the sequel? I would love to put all 4 sections of the novel together and release it as one. I'm still looking into that. No publisher yet but I'm confident I will move forward with it (and the 3rd book which focuses on Val) regardless. Digital publishing may be the way to go.

6) Outside of the Fat Girls in LA Trilogy are there any other books featuring plus size characters in the works? I'd actually like to do some short stories with my Vees - I have lived with them and loved them for so long that I find it hard to let go of them. So I might be doing that.

7) What is the biggest challenge you have faced as a writer? Getting noticed! There are a lot of books out there and not a lot of publisher marketing dollars so writers are called on to do most of it themselves. The writing is the easy part, actually. I have learned to write really quickly and to edit quickly and to love rewriting but when it comes to promotion, that is tricky. Not just for me but for most writers. We are predominantly introspective, shy people so asking us to promote ourselves is hard to do. The internet helps since we can hide behind our words or an avatar!

8) Where do you see yourself a year from now? With 2 books out from a new young adult series (they will be out in September 2010) and a new publisher for my own original works, including the sequels to Vee. Still writing, still teaching!

9) What are you reading now? I read a lot of YA books for research - so I know what's in the market and what books teens think are great. In that YA genre, I do enjoy reading books with plus-size characters. On my nightstand is Allen Zadoff's "Food, Girls and Other Things I Can't Have" which has a plus-size male protagonist and is based on Allen's own high school years. Allen is a great, funny guy!

10) Who are your favorite authors? Some of my very favorite authors write with plus-size heroines: Meg Cabot, Jennifer Weiner and Liza Palmer, to name a few. I also love genre writers like Stephen King and Ray Bradbury and women's fiction writers like Elizabeth Berg and Anne Tyler. I could probably go on and on- I have really eclectic tastes in books!

12) What is the one thing you would like all of your readers to know about you? I truly believe the most gorgeous women in the world are those who love their bodies, no matter what their size.

About C. Leigh Purtill: For a complete bio visit http://www.leighpurtill.com/AboutLeigh.html
Posted by Desiree at 3:48 AM

I am so glad that you found your way to writing books because you really make sure that your characters are given identities and voices that we need more of.